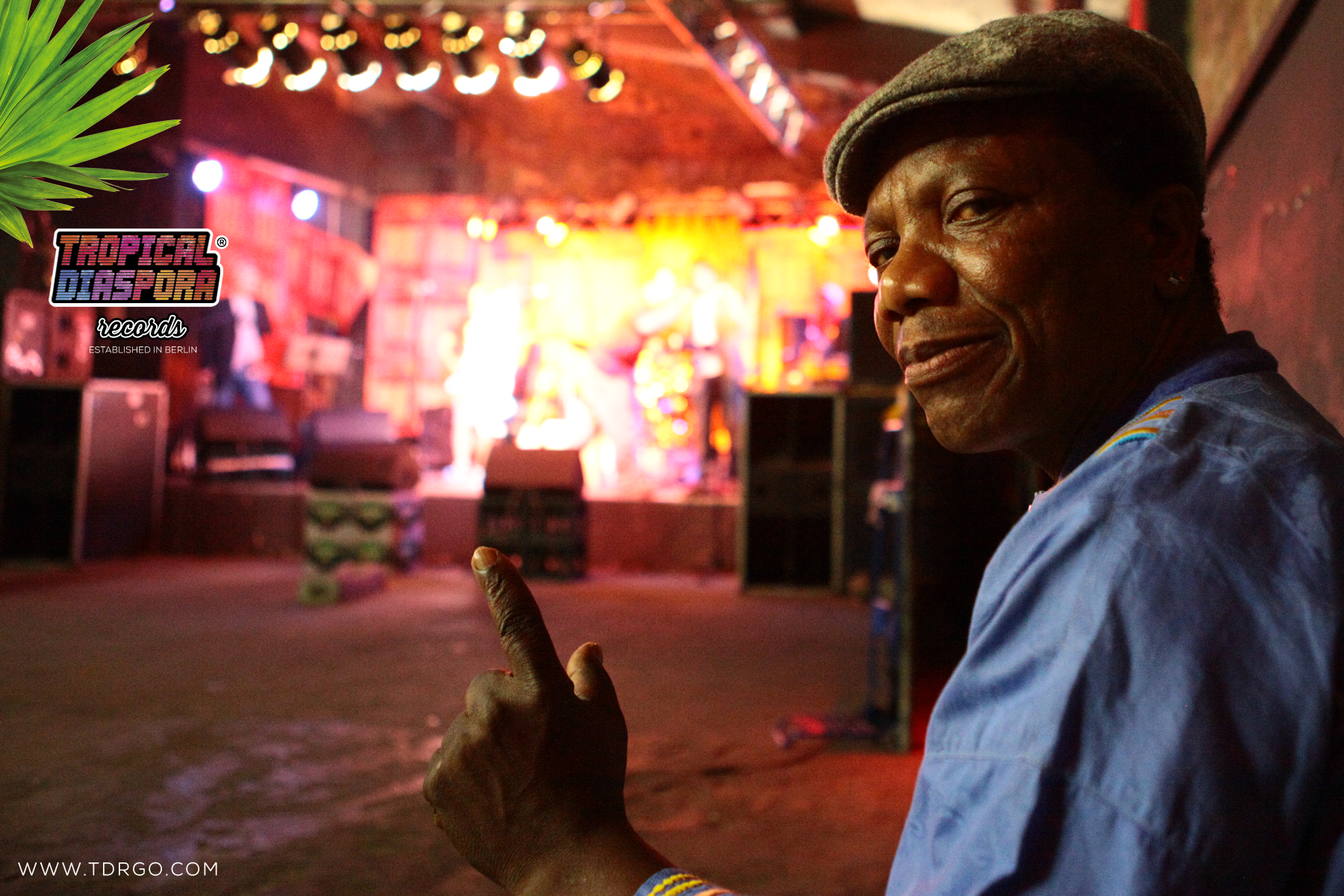 You may have heard this already: he is one of the last active members of Fela Kuti’s Africa 70, one of the most important and authentic representatives of Afrobeat, a follower of Fela, a true Afrobeat believer… We are speaking of Pax Nicholas or Nicholas Addo-Nettey, the Ghanaian percussionist, composer, activist and singer born in Accra and who lives in Berlin and came to be part of Fela’s legendary band in 1972.

The first album Pax participated in was “Shakara”, one of Fela’s biggest hits. In the following years Pax experienced as part of Africa 70 the international triumphal procession of Afrobeat. When they were not on tour with the band’s jet, they played in Fela’s Club, the legendary Shrine. Pax recalls:

“People came there from all over the world to order to learn about Afrobeat. James Brown, B. B. King, Ginger Baker, Stevie Wonder, Paul McCartney, Manu Dibango, only to name a few – I’ve been with all of them.”

He remained part of Fela’s band until 1978, when he -together with other band members- left Fela after a famous concert in the Berlin Philharmonic. For sure, still ruled by a military junta under the connivance of Western imperialist powers Nigeria wasn’t a nice place to go back. While Tony Allen went to Paris and Oghene Kologbo went to Belgium Pax stayed in Berlin.

To be clear, all this is part of Pax Nicholas’ life and musical career. But it has somehow become customary to present former Fela’s musicians -and it has been the same for Tony Allen and Kologbo- as replicas of Fela into the future of Afrobeat. You don’t see Pax, you see Fela’s recordings, you don’t read about Pax but only about Fela. Let’s talk about Pax, a heavyweight in the black music scene.

Pax is Afrobeat, but not just because Fela. Pax is Afrobeat because he is Africa and has the Beat. In the 1980s and 1990s, he made his name in the African music scene of Berlin with various band projects and percussion workshops. In 2003 he founded The Ridimtaksi together with a diaspora of professional musicians, a band that has evolved and changed over time. Today, 12 skilled musicians from Africa, South America, the Caribbean and Europe form The Ridimtaksi. Together with Pax Nicholas, the leader and soul of the band, all share the love for heavy and funky music. Pax Nicholas compositions, in many ways do not matter if classic or modern, they bring the audience in a bump ‘n’ grind groove that the people can’t get enough of. When the Ridimtaksi is on the stage you better be ready, these guys will make you move your feet and shake your hips!

With the Ridimtaksi Pax Nicholas combines classic and modern Afrobeat with American soul, gospel, funk and Ghanaian high-life. He has set himself the goal of renewing the legacy and memory of African music. And this is far away from the kind of Afrobeat that has been hijacked and pigeonholed by European and US musical labels, which have transformed a handful of harmonies into the soul of Afrobeat with the only purpose of selling recordings tagged as authentic.

Pax knows it very well and confesses that there still are companies looking for his old albums: a sort of romantic fascination. But, something has gone. The fight, the radicalism and the revolutionary have been lost. We still fight for Africa, Pax tell us sitting in the company of the portraits of Malcom X and president Nkruhma. We need to be political. Political in the lives we steer through our music, through the soul and the gospel, the funk and the reggae, all Africa, all Afrobeat.

We, at Tropical Diaspora® Records, are honoured and humbled to introduce you Pax Nicholas and the Ridimtaksi, the present of African music. 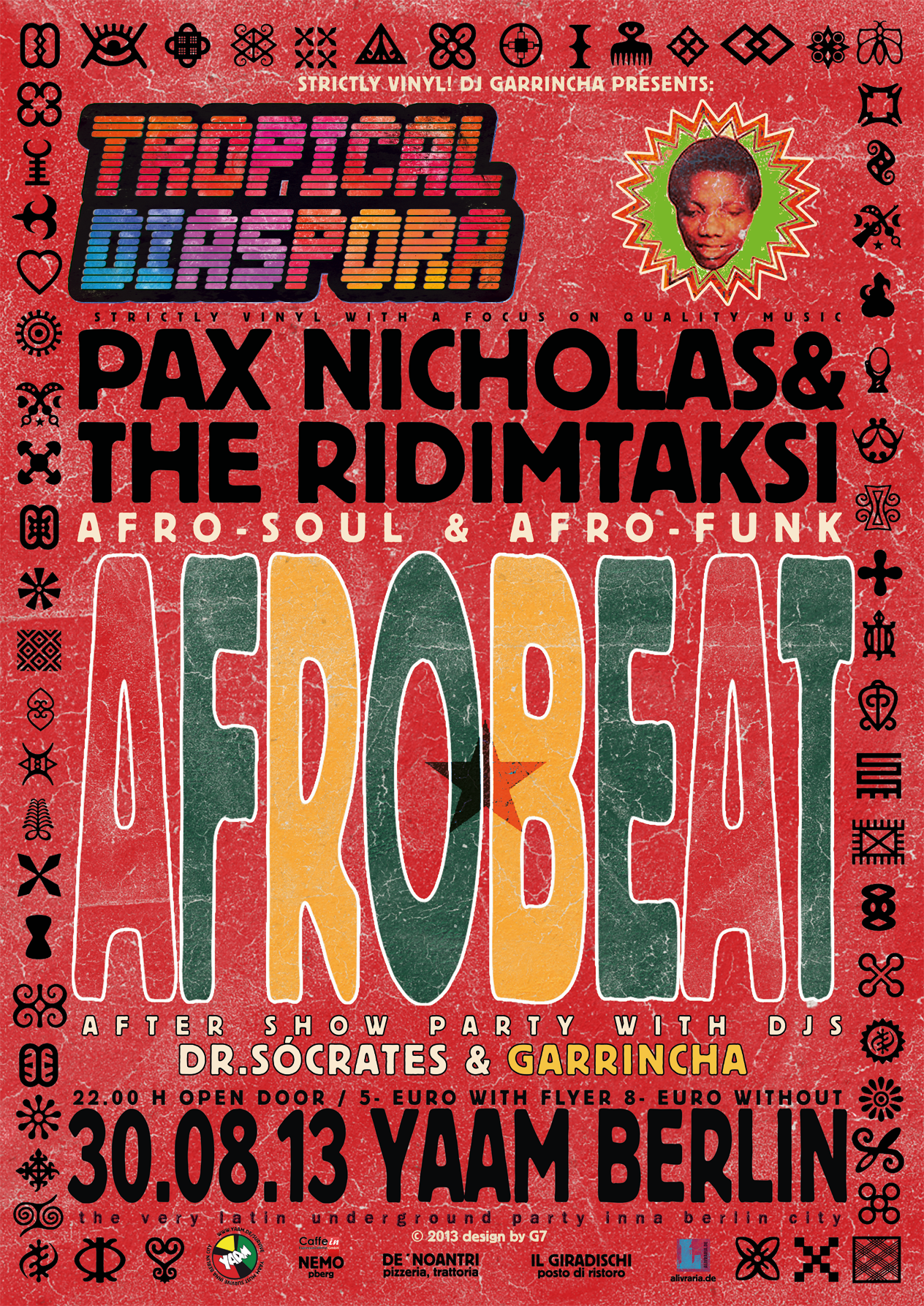 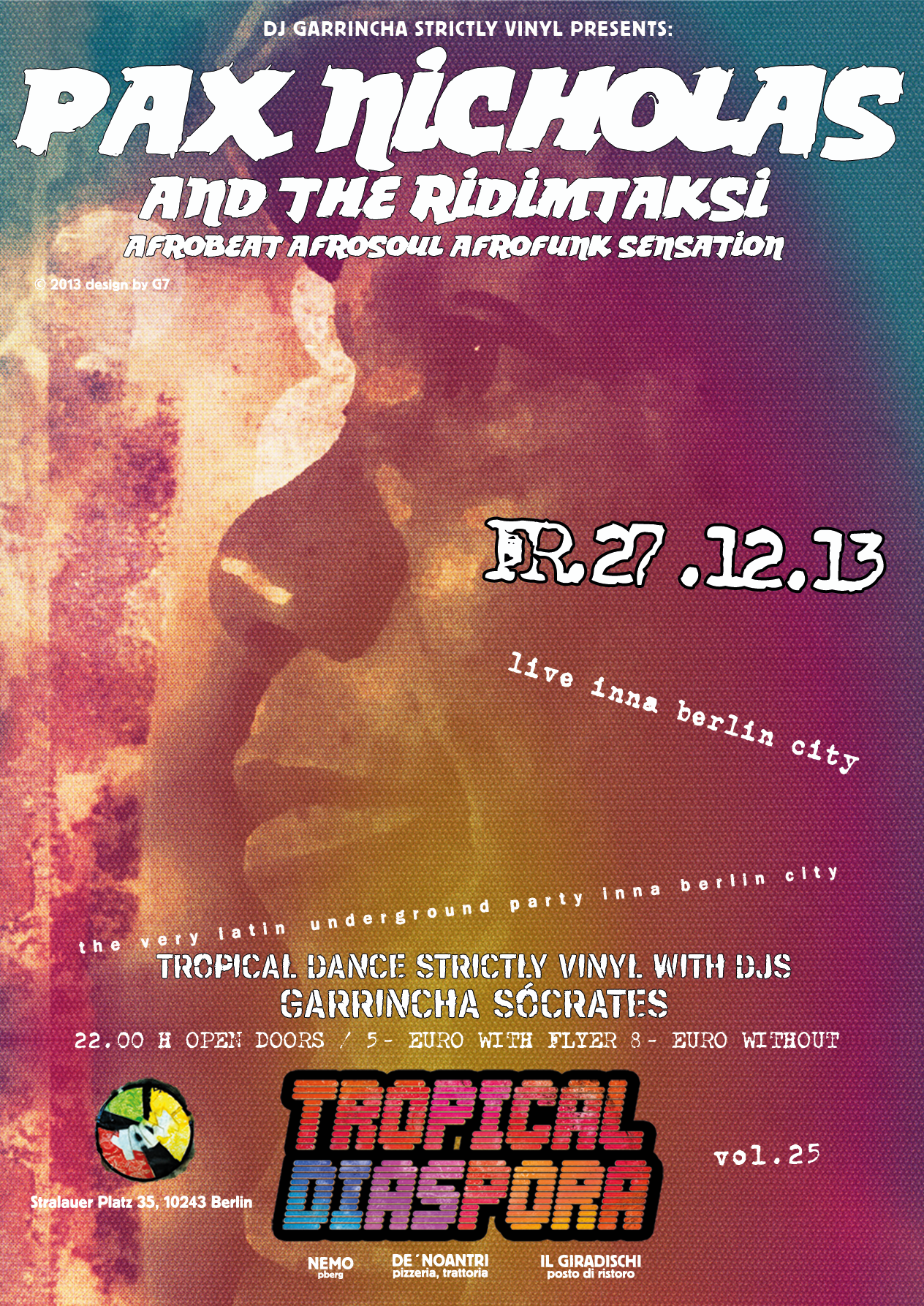 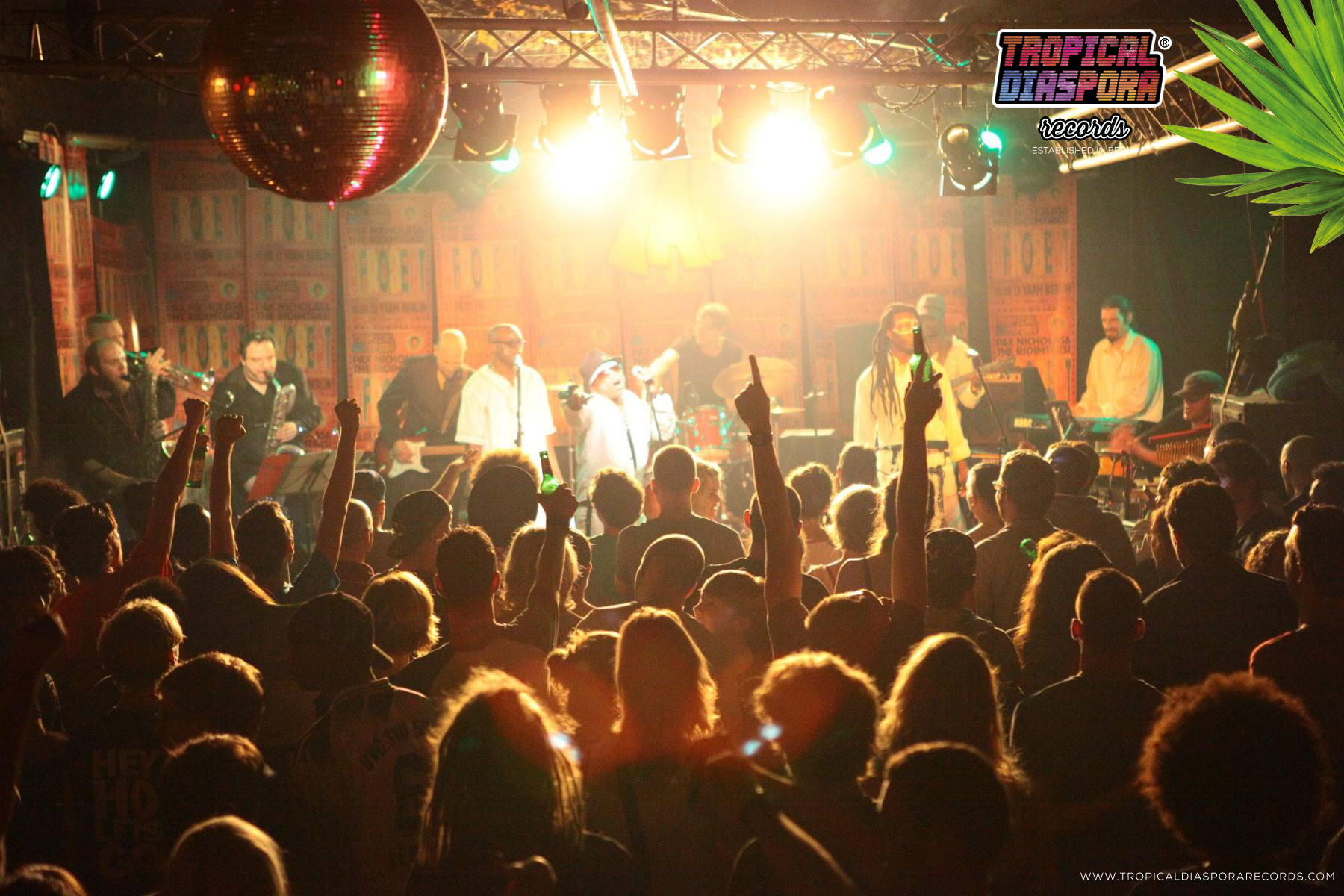 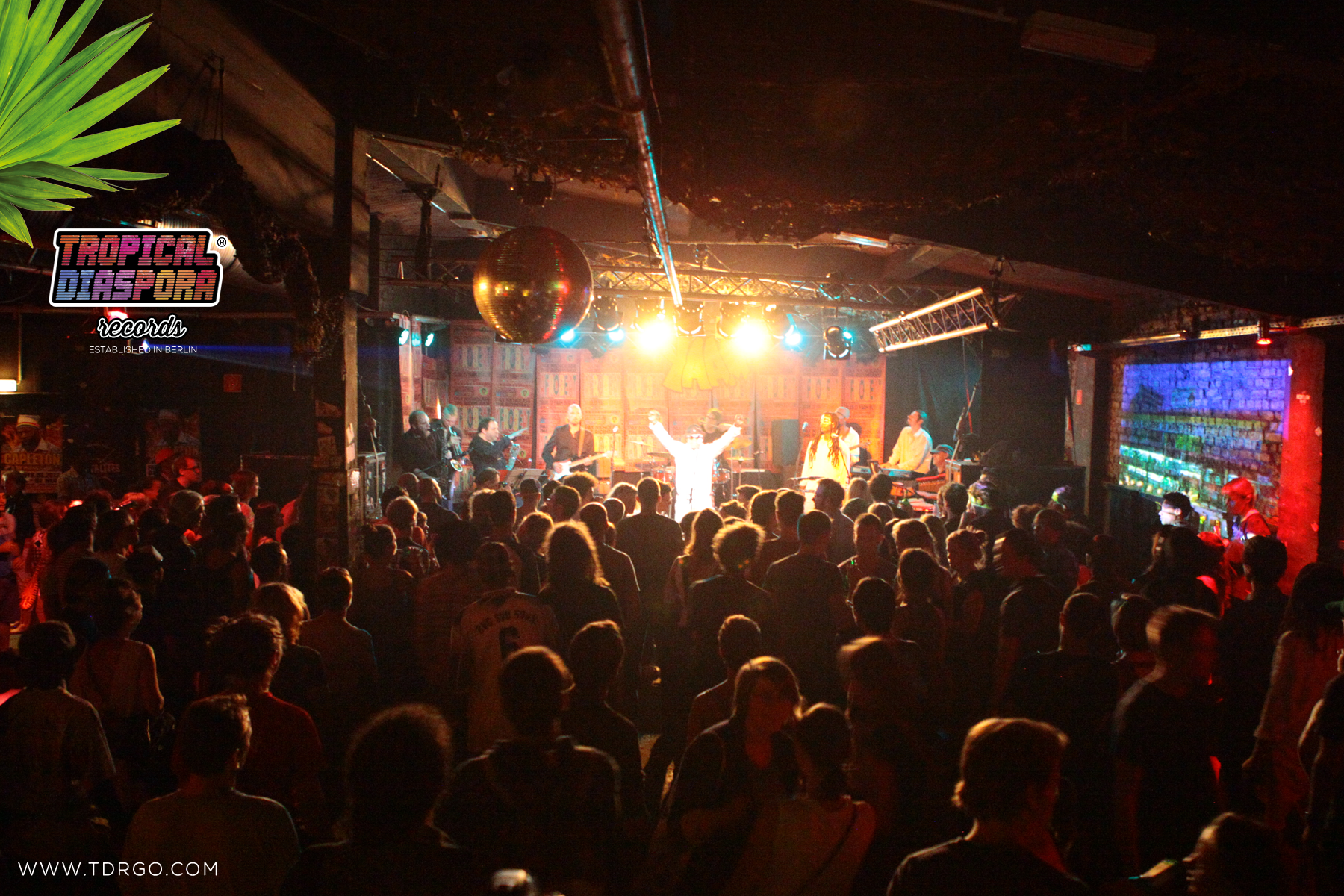 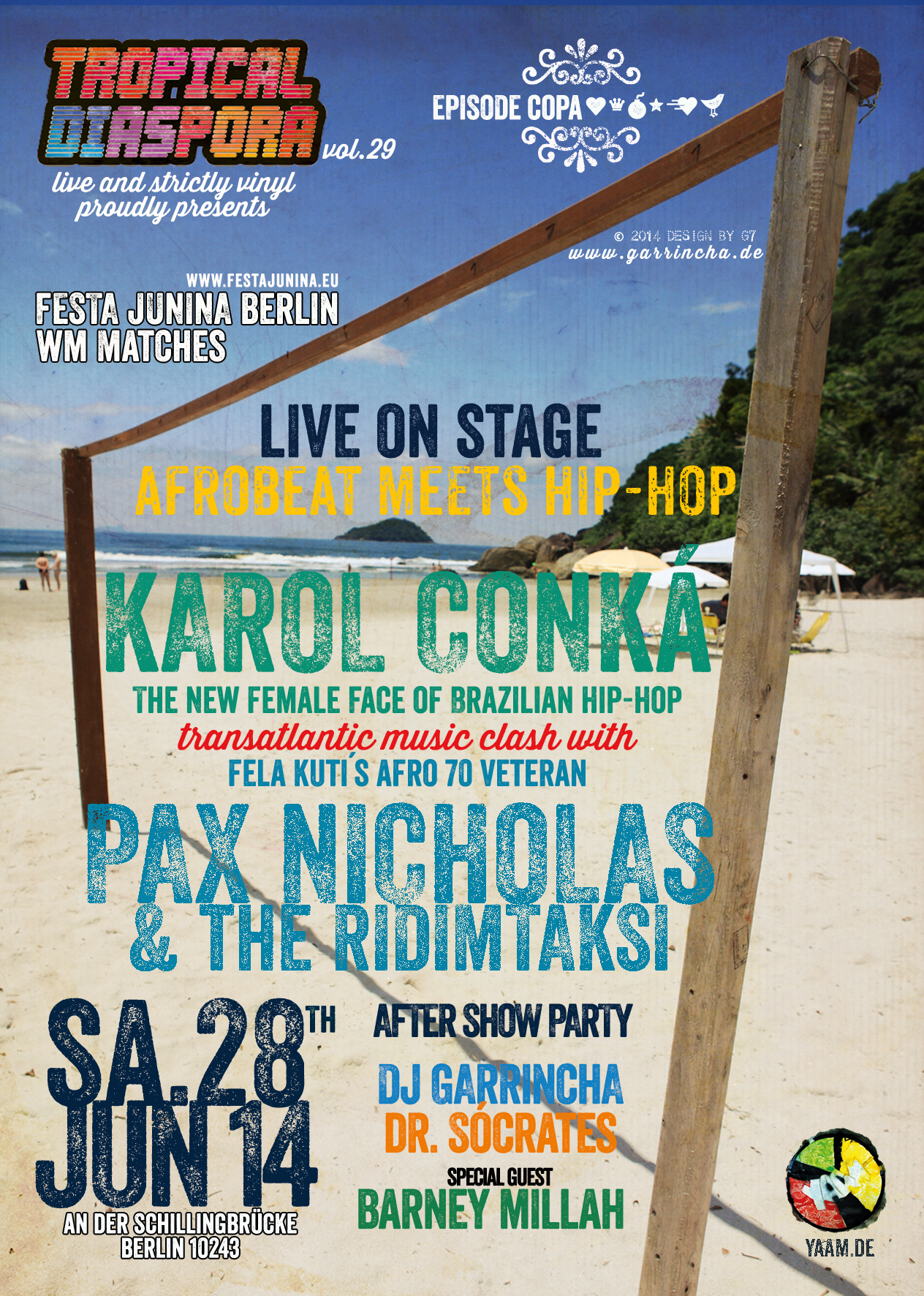