we have awesome news from the Tropical Diaspora Records universe for you, it makes us proud and happy in the same time, proud of the ability to create connections through music and happy to be part of this great project with the band from Bologna El V And The Gardenhouse, represented by the charismatic front man Marco “El V” Vecchi. 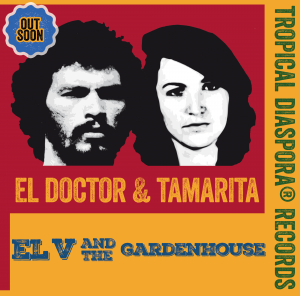 The words Mestiçagem, Internacionalismo, Cooperação or Mestizaje, Internazionalismo, Cooperazione and Mestizaje, Internacionalismo o Cooperación, are almost identical. Representing tree different languages as the common factor in the great so called Latinity connecting millions of peoples giving them a sense of belongingness telling us that one world is at least maybe possible. These words not only resume the way of work we are interested as music company but describe very well how our new record release came to reality, also the newest release TDR008 with the band El V And The Gardenhouse.

This record is born from the cooperation between Tropical Diaspora Records represented by me Dj Garrincha and Dj Dr.Sócrates respectively from São Paulo and Vigo, an Italian radio moderator and social activist from Naples based in Berlin Don Rispetto Giovanni, a musician from Bologna Marco “El V” Vecchi, and a Italian writer from Rome Lorenzo Iervolino author of the book “Un giorno triste così felice” (A sad day so happy) where Lorenzo has reconstructed the voice of Doutor Sócrates, o Magrão.

This whole synergy around one of the mos iconic personality in contemporaneous Brazilian history, Sócrates Brasileiro Sampaio de Souza Vieira de Oliveira or The Doutor Sócrates, a philosopher, a doctor, or a revolutionary? indeed Sócrates Brasileiro was a bit of all this, but it has gone down in history as one of the most original performers of the art to play “futebol”.

Nowadays in a time of a politic of walls and divisions taking over the words Miscegenation, Internationalism, Cooperation are more then only words, they are principles to be used in life to fight back. Here we find all tree components our work, the miscegenation, the internationalism and the cooperation, the proof that one world is really possible, the record TDR008 – El Doctor & Tamarita is a real example of this principles

In the video Vite Straordinarie: SÓCRATES (Calciatore Rivoluzionario) we want to introduce you an inspiring narration by Marco and Lorenzo, both give us a master class in Mestiçagem, Internacionalismo, Cooperação.